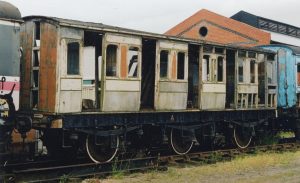 No. 373 has been one of the Trust’s last acquisitions. This is a 6-wheel 5-compartment carriage also built by Manchester Sheffield & Lincolnshire Railway at the Gorton Manchester works to Parker design, with features much the same as the fully restored no.946.  One of a once very numerous class of carriage, used on the suburban services of all the northern cities and conurbations, the six wheelers formed the main stay until the bogey carriages were introduced to increase e passenger capacity.   Donated by Great Eastern Group, Anglia Railway Museum, Chappel, this was a former LN&ER camping coach no CC35, first rescued in the 1970s.  Sadly this vehicle was severely damaged before it arrived with the Trust.