“When you start dismantling an old carriage – especially as old as these Barnums – you never know quite what you will find!” Says Mike Lang, Project leader of the Barnum no.228 rebuild at Ruddington. Classic examples are the reveal of the state of the bogies once extracted earlier in the year; and also removing the distorted buffer beam on the country end.

Not only has the new beam been sourced, cut and machined, but also refitted and protective painted but now the buffer beam has been treated and replaced.. This body first required a very gradual lift to achieve a shallow separation of the wooden body from the steel main frame.
As a parallel task, the long awaited preparation and installation of the end-stiffening plate which ensures no distortion of the main steel frame is now fitted in at one end. Some awkward placed preliminary welding was required first to fill some damage to the main structural beam members. The first plate of the two plates having been machined and primed, then was bolted (though originally riveted) securely immediately below. The previous end-plates almost disintegrated from corrosion when they were extracted. The second is being prepared for the repeat fitting.

“These are particularly successful work tasks. Careful control of the separation of the timber body from the steel frame by jacking a mere 4 inches, was essential while the Barnum itself was on stands off its bogies,” Mike continued. “Full marks to our team of Ian Parker, Keith Stimpson, Mel Cresswell.” 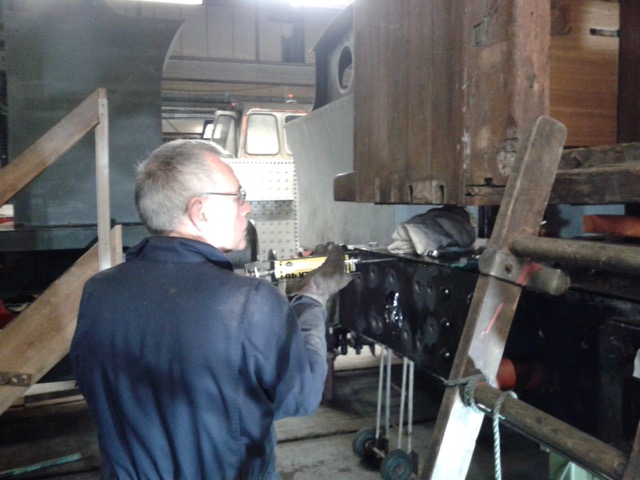 Buffer beam being secured in place on the Barnum no.228 with Ian Parker tightening the fixing bolts – Photo courtesy Keith Simpson 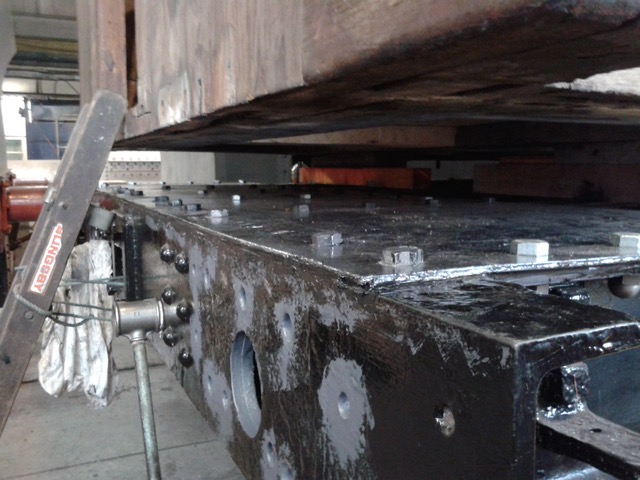